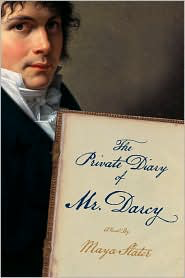 Jane Austen’s enigmatic hero is tantalisingly absent for most of Pride and Prejudice, but I had never thought of filling the gap myself till someone asked me ‘What book would you most love to read, if only it had been written?’ I found myself answering, without hesitation, ‘Oh, Mr Darcy’s diary.’ I had idly toyed with the idea before, and now it bothered me for months, till finally I had to give in to it. I thought I would be sticking closely to Jane Austen’s novel, so I started straight in describing Mr Darcy’s first meeting with Elizabeth, Austen’s heroine.

But then the book’s direction was taken out of my hands by my hero. Mr Darcy was going to lead me where he wanted to go – and I soon found that he was taking me to places where Jane Austen could never have followed. Although the book works through to Austen’s lovely happy ending, on the way it tells the hero’s own separate, surprising and sometimes shocking story. So you don’t have to know Pride and Prejudice to read it.
Some opinions on the UK edition of this book
(See also the full-length reviews.)

"Seamlessly weaving in bits of the original, this entertaining novel gets the curmudgeonly hero spot on" (Katy Guest The Independent )

"As moving and enjoyable as could be wished... Mr Darcy fans everywhere will welcome his Diary to the canon" (Wendy Holden Daily Mail )

"A thoroughly absorbing read" (Yours Magazine )

This short story in an anthology of Austen-inspired fiction retells the story of Elizabeth and Darcy’s romance as witnessed by the naïve Maria Lucas, who misinterprets everything that happens.

I was commissioned to do a new translation of Molière by Oxford World’s Classics - and as Molière is one of my favourites, I was eager to take it on. I decided to do a rhyming translation, using Molière’s own verse form, the alexandrine or twelve-syllable line. I spent two years translating the six plays - some of the rhyming couplets took me hours. It’s a bit like doing a difficult crossword puzzle - you know there is a ‘right’ solution, it’s just a matter of finding it. Hard work, but I loved doing it.
​Three Pre-Surrealist Plays, Oxford World’s Classics, 1997. ISBN 0-19-283217-4

When my students planned a production of Alfred Jarry’s rude, rumbustious play, Ubu the King, they showed me the translation they planned to use. It was awful. After tinkering with it, I decided that it would be simpler to translate the whole play myself. So I did, they performed it, and it got lots of laughs. It was not till much later that I thought of publishing it, together with two other favourite plays of mine, Apollinaire’s The Mammaries of Tiresias, a wittily surrealist fantasy with a hidden message about birth control, and Maeterlinck’s The Blind, a magical and disturbing vision of a sightless world.
​.La Fontaine: Selected Fables, translated by Christopher Wood, edited by Maya Slater, Oxford University Press, World’s Classics, 1995. ISBN 0-19-282440-6 (Editor).

I loved La Fontaine, loved teaching him, and was delighted to be asked to edit and write the introduction to a new translation. The translator and I worked for hours to bring these animal Fables across as closely as possible to the original, while preserving their ironic, often biting wit.
​Boris Pasternak: Family Correspondence 1921–1960, translated by Nicolas Pasternak Slater, edited by Maya Slater, Hoover Institution Press, Stanford University, 2010. ISBN: 978-0-8179-1024-2 (Editor)

This selection reflects the events of Pasternak's life during forty turbulent years through his correspondence with his parents and sisters, and sheds new and revealing light on the great writer's life and work. The letters are especially poignant in that after 1923 Pasternak never saw his family again. I was asked by the Hoover Press to edit this translation by my husband Nicolas.

This has been an absorbing and all-consuming task that has taken us both a year of solid work, arguing over every sentence. The pictures are taken from paintings by the Russian Impressionist painter Leonid Pasternak, who was Nicolas's grandfather, and Boris Pasternak's father. Boris wrote:  ‘Papa… is a great, great artist, far greater than I am.’ He would undoubtedly have chosen Leonid Pasternak to illustrate his novel – but of course it was not to be, as Leonid died in 1945, before any of Dr Zhivago had been written down. Instead, I have assembled 68 of Leonid’s pictures  chosen for their echoes of the novel. Inevitably they won’t match the text as closely as a commissioned illustration, but nevertheless the pictures and the text are often uncannily close.  I was helped by a lucky coincidence: almost the whole novel is set in exactly the period when Leonid was working in Russia, and at his most prolific. In 1921, Leonid left Russia, never to return, and saw his son only once after that. So the pictures chosen here are mostly taken from that early period, when Leonid was painting Russia.
Some of the pictures are genuine historical documents, like an eyewitness record of a violent street protest in 1905, drawn by Leonid, looking out of his Moscow window. Others, though they seem appropriate, are actually depicting something quite unrelated – for example, a sketch illustrating a family meal actually shows Leonid’s own family decorating Easter Eggs. Yuri Zhivago and Boris Pasternak himself were more or less the same age, so it made sense to use Boris as a model for Zhivago. Other members of the family are also used – Leonid drew them constantly. Even Leonid himself appears  - and I have managed to include a portrait of  the translator, my husband Nicolas, who was painted by Leonid in what was probably his last ever watercolour.


This study of La Fontaine’s style represents about ten years' work. I started teaching La Fontaine, and quickly became fascinated by the subtle brilliance of his poetry. Many people dismiss him as an amusing children’s poet, dashing off witty moral tales in verse. But these lively fables are in fact small masterpieces.


​
Humour in the Works of Proust, Oxford University Press 1979.
This book started off as my doctorate thesis, on an aspect of Proust’s writing that gets far too little attention. Of course his masterpiece is serious, philosophical, even searing, and always vividly descriptive, but these strengths tend to obscure the fact that it is also a great comic novel. Dozens of ridiculous characters people the book, and their ideas, their language, even their punctuation can raise a smile, and at the most tragic moments.

For this collection I got together a group of dynamic women from different walks of academic life - specialists in literature, sociology, law, history and psychology - and asked them to write about men, any aspect that really got them fired up. Their contributions are all excellent, and very different.